Country music fever is hitting the high seas with three of Australia’s latest and greatest country music stars confirmed to headline P&O Cruises’ first country music themed cruise departing Brisbane this December.
Gold Coast star Casey Barnes who has performed alongside big international names such as Mariah Carey and Bryan Adams will take a break from his sell-out tour to perform his hit songs to more than 2000 guests onboard.
The home grown success story will be joined by Country Music Awards Hall of Fame inductee James Blundell and The X Factor Australia singer-songwriter Caitlyn Shadbolt.
Each of the three artists will take to the ship’s main stage for a spectacular solo performance before coming together on the final evening for an epic finale at the late night Country Music Jam Session.

Casey, James and Caitlyn will be supported by many more country musicians and singers including well-known comedian Rusty Berther who will perform with his band, The Cartridge Family.

Award-winning entertainer Donna Campbell will also take to the ship’s main stage to deliver the spectacular musical tribute show, From Rags to Rhinestones, which tells the story of one of the greatest country music singers of all time, Dolly Parton.

The country theme will extend throughout the cruise with line dancing, ukulele lessons, bush poetry and the cruise line’s first Country Music Sailaway Party in full swing as the ship leaves Brisbane. 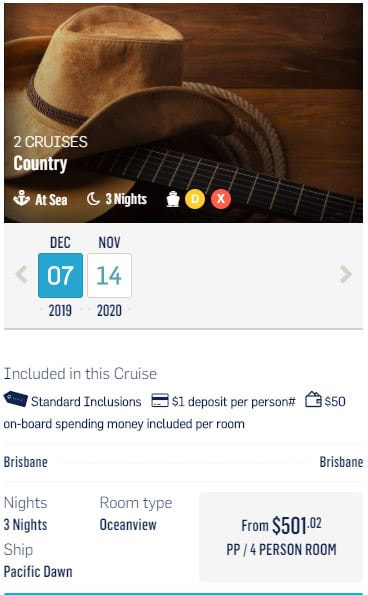 Calling all Country music lovers - how about a true country throw down while out at sea?! Where better to practise your line dancing and don your cowboy boots?