TWO hours by road southwest of Darwin, Litchfield National Park was proclaimed in 1986 to conserve the pristine 1500sq km of the ancient sandstone Tabletop Range and its surrounding lowlands, gorges, monsoon forests, waterfalls and clear freshwater pools.
You can explore the region on your free day on this great Ghan, Darwin to Adelaide holiday package when you stay in Darwin.

Unlike the more famous Kakadu National Park where all the creeks and billabongs are off-limits for swimming, Litchfield offers plenty of mostly crocodile-free pools for a safe, refreshing dip. It’s also an area of deep spirituality for local Aborigines. 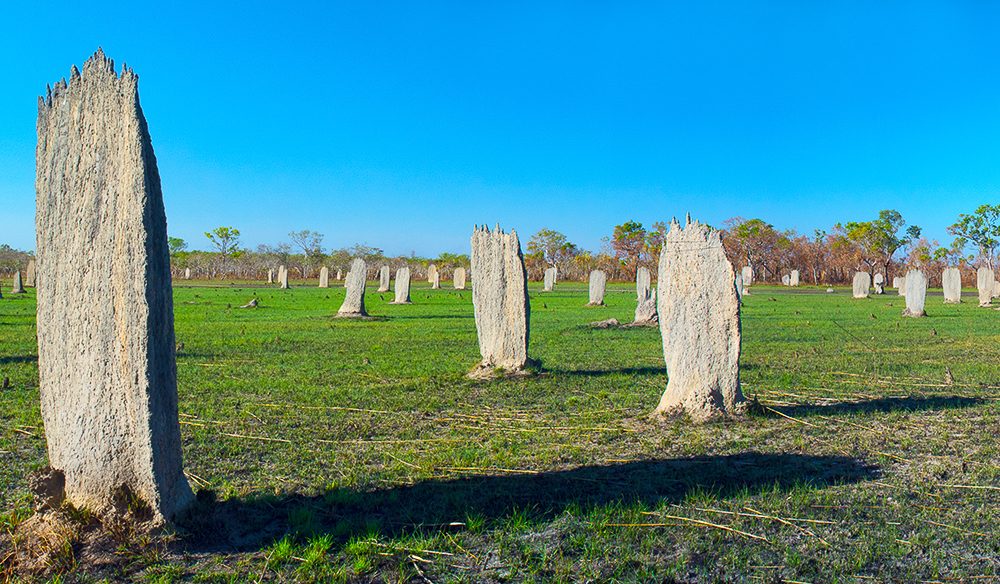 Across Litchfield are “cemeteries” of enormous termite mounds from cathedral-like giants to wedge-shaped magnetic structures that always face north and south and take decades to assemble. Termites need constant temperature and the alignment acts as a temperature regulator. Aborigines also used them as compasses.

A collection of sand palms (Livistona humilis) is barely noticed until Tess plucks a young leaf, shreds it and demonstrates how the strands are twisted into a soft, surprisingly strong piece of string.
The palm is also eaten. Edible bits include the fruits, the heart of palm roasted or raw and the core is mashed into a backache treatment and a drink to treat ailments from chest infections and diarrhoea to tuberculosis. 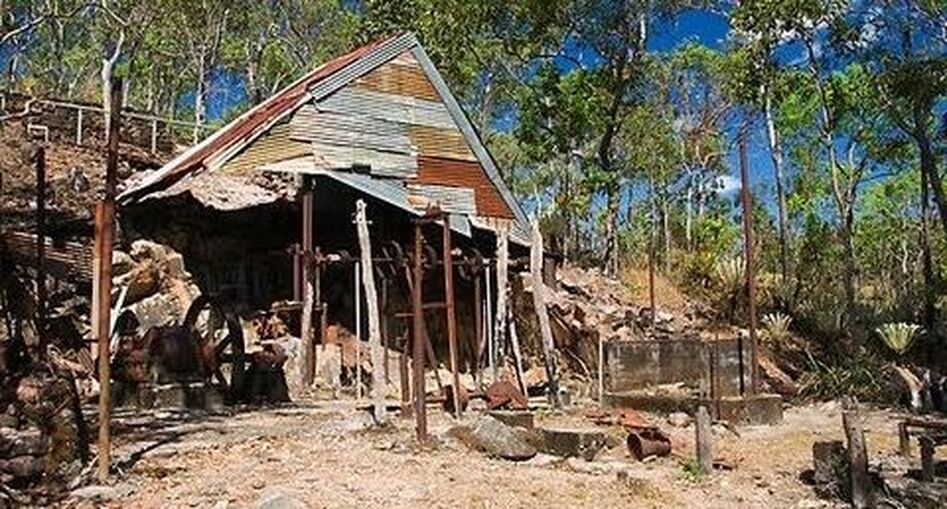 Tin mining began at the Marranunggu Aboriginal campsite, Makanbarr, in 1906 near Bamboo Creek and continued intermittently until 1955.
Some sections of the old buildings are still standing, and you can see remnants of equipment relating to ore extraction, processing, transport, an explosives magazine as well as domestic objects. Tin was mined at the site sporadically until it was abandoned in 1955.
You can take a walk around the site and learn about the history and processes used during it's operational days. 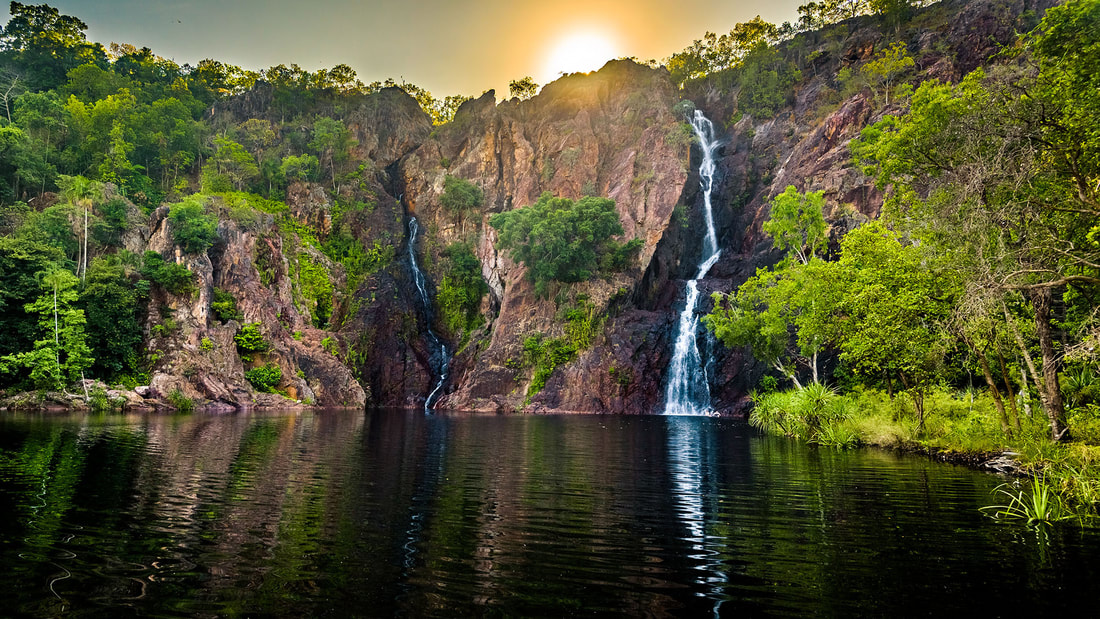 One of Litchfield’s most popular and accessible attractions, Wangi Falls has two main streams and many tiny seepages that tumble down from the top of the escarpment into a broad plunge pool. What isn’t generally known is that this popular swimming spot is a “special place” for indigenous women.
The water is clear and cool and even chilly under the cascade. The pool is occasionally closed if significant rainfall raises water levels high enough for crocodiles to gain access. Non-swimmers can hike around the rainforest trail, where the lush habitat attracts scores of birds and fruit bats. 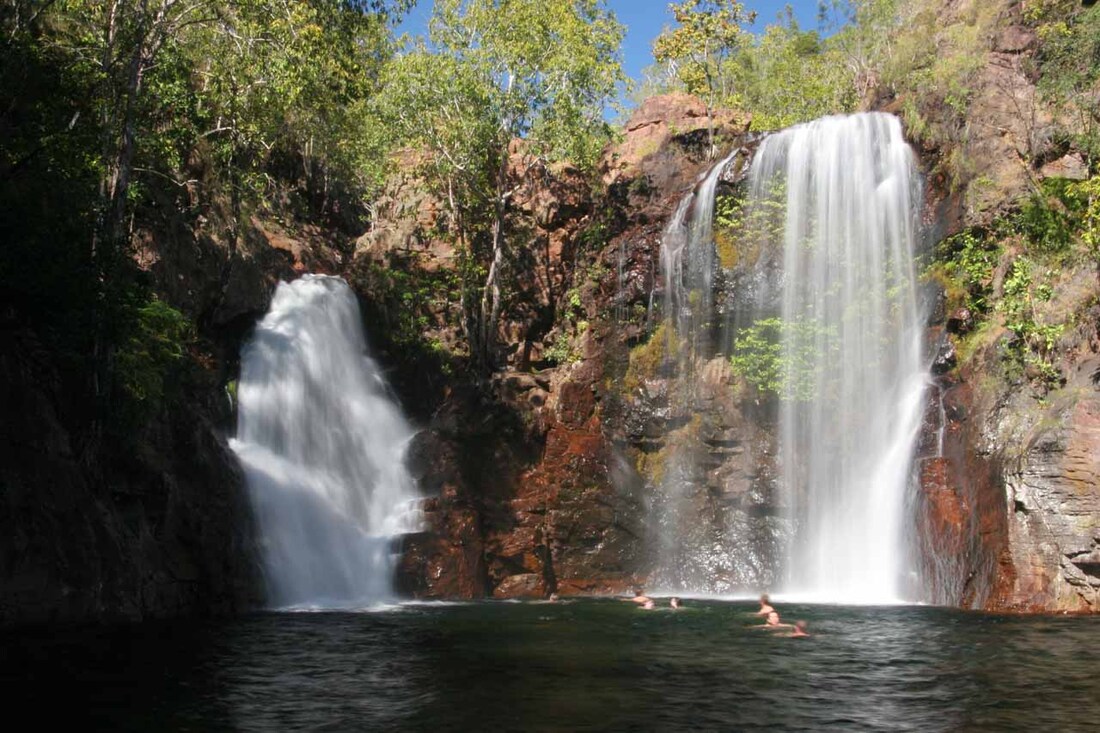 The next waterfall is a “special place” for indigenous men. The twin Florence Falls cascade into an emerald green, crocodile-free plunge pool set in a pocket of monsoon rainforest, some 150 steps down from the car park. For the less energetic, there’s an easy access lookout.
The falls on the left are known to Aboriginal men as the Sugar Glider Place while the larger falls on the right are the Cycad Place. This is one of the best cool pools and quieter than Wangi.